Chronicles of Terror. Volume 4. German atrocities in Śródmieście during the Warsaw Uprising 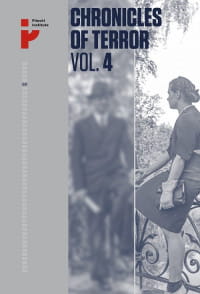 In the "Chronicles of Terror" series we publish testimonies of specific individuals – victims and witnesses of two totalitarianisms. They record the personal experiences of thousands of Poles and their families and loved ones. The present volume comprises accounts concerning the events that took place in the Śródmieście district during the Warsaw Uprising.

The witnesses describe mass extermination, conducted by the Germans in such locations as the Jordan Garden, the ruins of the General Inspectorate of the Armed Forces, Hala Mirowska, the Opera or Anc's Pharmacy. Many of those testifying miraculously survived executions or were used as human shields for German tanks and infantry units. The accounts also present the methodical destruction of Śródmieście's buildings, carried out both during and after the fighting.

63 Days of Life an Struggle. Miniature

63 Days of Life an Struggle. Miniature

The „Chronicles of Terror” series is devoted to the publication of testimonies submitted by specific persons – victims and witnesses of the crimes committed by the Nazi and Soviet totalitarian systems. These depositions present the personal experiences of thousands of Poles, their families, and friends.

The accounts gathered in this volume concern the period from September 1939 to July 1944, whereas the leitmotif that conjoins them are the executions that were conducted by the Germans in Warsaw and its environs throughout the entire occupation. Some of these killings were committed as punishment for various types of “crimes” – from involvement in the resistance to participation in clandestine classes. Others were aimed at exterminating the Polish intelligentsia, were retaliatory in nature, or were simply manifestations of the occupier’s criminal whims. Both secret and public, mass and individual, by shooting or by hanging, the accounts brought together in the book clearly show that executions formed an integral part of everyday life in occupied Warsaw.